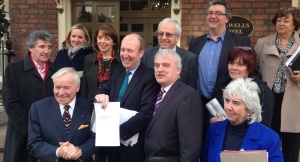 Independents are back in the news this week, specifically Michael Lowry and his ‘will-he won’t-he’ be in the mix for government formation in a few weeks.

2011 was a peak election for non-party candidates but it looks like the numbers running in 2016 might exceed that previous high point. Independent candidates are not a new phenomenon in Irish politics. In fact, they have been one of the unusual features of the Irish party system for decades. The label independent is applied loosely and it covers a wide variety of candidates.

The first group of independents are those that are disaffected with their political parties. Usually they have been ‘shafted’ by the mother ship, to use the colloquial description and as a result, they choose to run as independent candidates. The Healy Rae dynasty is the epitome of this group.

Often, there is overlap between the disaffected party candidates and the next group of independents who might be classified as local community representatives or local promoter independents. This group includes community activists, who very often campaign on a set of specific local issues. They usually make up a large component of the independent candidates on the ballot. Local hospital candidates tend to be prominent among this group and a new collection are contesting in 2016 on the banner No GP, No Village.

New to the field in 2011 were the national interest independents. Many of these candidates declared on platforms of banking and public service reform. They had some success with Shane Ross and Stephen Donnelly both elected in 2011 but they contesting in 2016 under new banners and there is no sign of a return of this group.

Unhelpfully, micro-parties are often included under the label but they are quite different in that although they are small political forces, they contest elections on shared policy platforms and offer integrated policy options to the electorate. The Social Democrats, Renua and the AAA-PBP alliance all fall into this grouping.

The polling data suggest that support for independents is falling from a high of nearly 30 per cent but it is likely that this category of candidates will still do well and their prominence in the polls suggest that there is appetite for political ideas outside of the mainstream parties. However, there are major problems with independents in the political system.

Having said all of this, there is a problem with the party system. Clearly, it is not connecting with a significant number of voters. Political parties need to look at their own structures. The overwhelming policy of “control” employed through the party whip system by Irish political parties is a major factor in deterring independent voices from joining political parties. Free voting and more open policy making within parties and parliament would go some way to addressing this deeply unattractive feature of Irish politics. Open votes are used in the UK occasionally, and Canada has been experimenting with freer voting for some time. It may be time for the Dáil and political parties to explore this option.

In the absence of change within political parties, independents bring different voices into the political system. However, they may bring more problems than solutions. They perpetuate the cycle of localism and personalism that is so pervasive in Irish politics. While some independents will argue that they intend to legislate in the national interest, the history of independents within the system is localist in outlook and action.

5 thoughts on “Independents; More for Tipperary/South Kerry/Wicklow is less for everyone else”