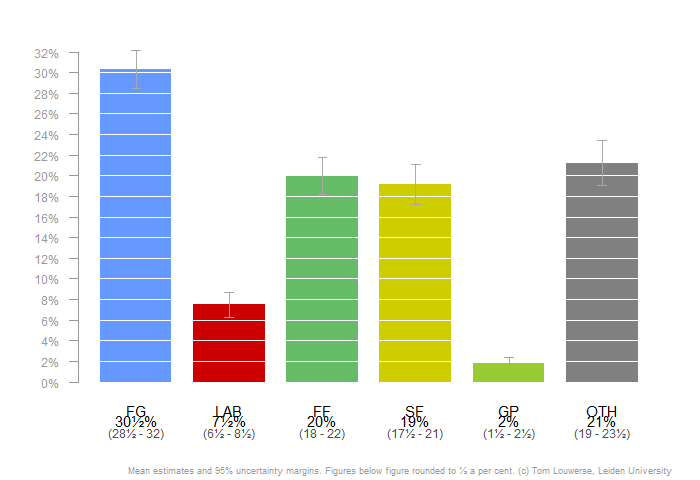 Two new polls were hailed as good news for Fianna Fáil this weekend. A Red C poll put the party up 2 points to 19 per cent, while B&A put the party up 1 point to 20 per cent. In fact, neither change is statistically significant on its own – with the December poll of Red C seemingly an ‘outlier’ on the low side (see below). Even if we combine all of the polls, as the Irish Polling Indicator does, we find no change in support: Fianna Fáil remains stable at 20 per cent. Support for Micheál Martin’s party has not been statistically significantly different from current levels since May 2014.

Fine Gael remains firmly in the lead just above 30% in the Irish Polling Indicator. The party consolidates the winnings it made in the second half of last year. The small drop the party saw in the Red C (-2% since December) is likely to be mainly due to sampling error. Even if party support remains stable, polls sometimes register changes due to the fact that they study only a sample of the total population. The junior coalition party, Labour, continues on its trajectory of low level support, currently at about 7.5%.

Sinn Féin is now at about 19% support. This is a clear improvement on its last General Election result, but the party has polled higher between May 2014 and March 2015. The current level of support is comparable to what Sinn Féin has scored in most of the current parliamentary term. The Green Party is another beacon of stability, albeit at the much lower level of about 2%.

Independents and others have known highs and lows over the last years. They are currently at a comparative low, although this still means a sizeable degree of support at 21%. This grouping consists of many smaller parties and independent candidates, but it is difficult to break it down as their support was not consistently reported in polls. A glance at the most recent polls suggests that the bulk of the independent/others group consists of independent candidates, including the independent alliance, at about 15%. Minor parties, such as the AAA-PBP, Renua and Social Democrats mostly poll between 1 and 3 per cent. 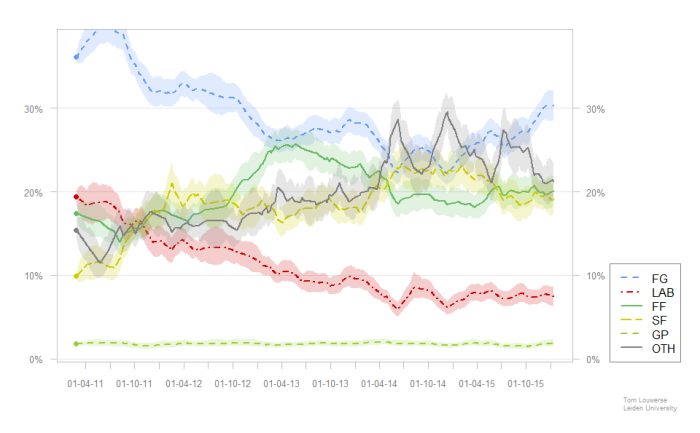