Last week — in the closing days of the 31st Dáil, and long past the agreed time for a government response — the government finally found some time to deal with the remaining reports of the Irish Constitutional Convention. This provides an opportunity for a final report card on the government’s reactions to the ICC, a body that it established in the first place. 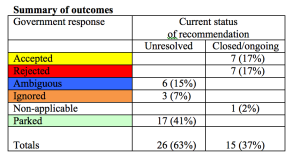 The record is not impressive.  As the summary table shows (for further details go this longer table: ICC outcomes Jan 2016), a mere seven (17%) of the ICC’s recommendations were accepted by the government. While it is true that they government has formally rejected the same number, the most common response of the government (in 41% of the cases) has been to ‘park’ the issue (i.e. kicking the can down the road to a future government).

If any consideration is to be given to establishing a new Constitutional Convention in the next Dáil — as was mooted in last week’s Dáil debate — it is imperative that tighter guarantees are made to require the government to treat that Convention with a lot more respect than it has treated this one.