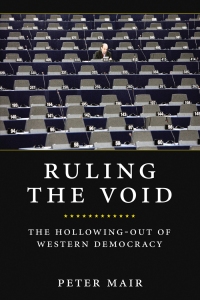 The latest book (published posthumously) by the late Peter Mair — Ruling the Void: The Hollowing of Western Democracy (published by Verso Books).

Here is the blurb….

In the long-established democracies of Western Europe, electoral turnouts are in decline, membership is shrinking in the major parties, and those who remain loyal partisans are sapped of enthusiasm. Peter Mair’s new book weighs the impact of these changes, which together show that, after a century of democratic aspiration, electorates are deserting the political arena. Mair examines the alarming parallel development that has seen Europe’s political elites remodel themselves as a homogeneous professional class, withdrawing into state institutions that offer relative stability in a world of fickle voters. Meanwhile, non-democratic agencies and practices proliferate and gain credibility—not least among them the European Union itself, an organization contributing to the depoliticization of the member states and one whose notorious “democratic deficit” reflects the deliberate intentions of its founders.

Ruling the Void offers an authoritative and chilling assessment of the prospects for popular political representation today, not only in the varied democracies of Europe but throughout the developed world.

Peter Mair (1951–2011) was one of the leading political scientists of his generation. He studied at University College Dublin and the University of Leiden, and worked at universities in Ireland, the UK, the Netherlands and Italy, finally becoming Professor of Comparative Politics at the European University Institute, Florence. His books include Party System Change and, with Stefano Bartolini, Identity, Competition and Electoral Availability.