I’m currently reading José Saramago’s Seeing (a gift from a former student), which tells the story of how panic sets in among a city’s political classes after the vast bulk of the citizens cast a blank ballot in an election. It’s a great read, though I have to admit I thought the storyline a bit far-fetched. Even with all the problems of our political system are we ever likely to end up in a scenario where such large numbers of citizens are so angry that they simply refuse to engage in the political process at all? Granted, electoral turnout is in decline, but outside of the USA and Switzerland across most of the world’s democracies the bulk of citizens still vote. 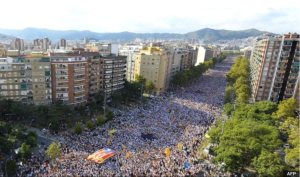 To my mind Saramago’s image of a citizenry so turned off that they disengage completely from the political system just didn’t seem credible. That was until yesterday when I stood in the centre of Barcelona and witnessed Catalonia’s (now) annual independence day rally of September 11. Standing among more than one million Catalans (the official estimates suggested anything between 1.5-2 million) it was hard not to be moved by the passion behind the demands for independence from Spain. That fact that similar numbers have turned out in the preceding three years shows just how deep the passion is. Denied the right by Spain’s constitutional court to hold a referendum on the question, and having been repeatedly ignored by the Spanish political establishment supporters of Catalan’s independence movement have now called early elections for their regional parliament on September 27, proposing to treat these elections as a ‘proxy referendum’.

Regardless of the merits of the case for Catalan independence (and having spent two days in intense discussions about this, I have to admit I find the case a strong one) the lack of any response from the Spanish government is remarkable. Ignoring one million people on one occasion might be (I stress might be) possible, but to do so on four separate occasions is just plain wrong. A rational government response would be to engage – to call the groups in for discussions, to look for a possible consensus. That the Spanish political elite is doing none of this speaks volumes for just how dysfunctional its political system has become.

If there is a lesson to learn from this it is that politicians should be awake to the needs to listen to their citizenry – you ignore the citizens at your peril.

3 thoughts on “Politicians ignore citizens at their peril”