A new poll by Millward Brown came out this weekend, with headline figures of 26% for Sinn Féin and 22% for Fine Gael. This let many news outlets to conclude that Sinn Féin is now the biggest party in the Republic. But this conclusion cannot be drawn from the Millward Brown poll, based on 991 respondents.

Second, this calculation assumes the poll is a random sample from the population. In reality, it is very difficult to get a random sample, because (among other reasons) it is difficult to draw up a list of voters and to get them to participate in the polls. Therefore, the error margin might in fact be larger than the reported 3.1%. This is sometimes called ‘Pollster Induced Error’. The Irish Polling Indicator gives an (arguably rough) estimate of the Pollster Induced Error for Irish parties, which it estimates to be between 1.3 and 2.7 for Sinn Féin. That means that the error margin is likely to be at least 1.3 times the calculated margin. So, probably even the 4.3% margin of error is an optimistic estimate. 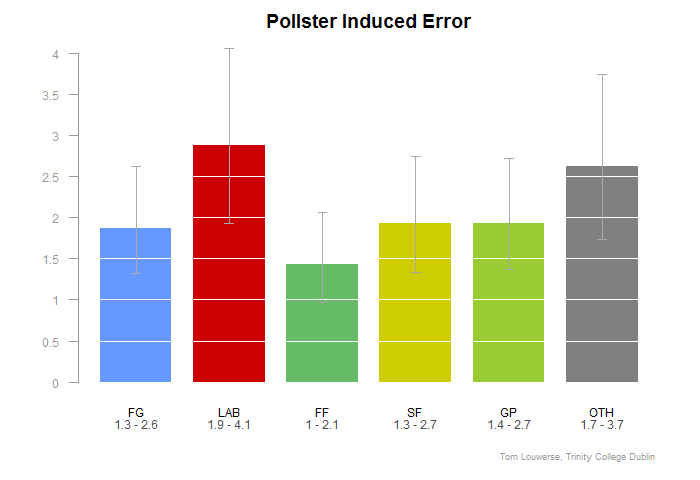 Third, polling estimates are prone to systematic error. This is visible in the fact that some polling companies have structurally higher estimates for Sinn Féin than others. In the graph below, we can see clearly that Millward Brown (green dots) generally has a higher estimate for Sinn Féin than other pollsters do. This effect can be calculated to be just under 1%. It is helpful to take these ‘house effects’ into account when interpreting polling results.

Therefore, one should be cautious to base sweeping statements on a single poll. The Irish Polling Indicator summarises information available from all Irish pollsters. This provides a more nuanced overview of the state of the parties. The Polling Indicator suggests that Fine Gael, Sinn Féin and Independents are on similar levels of support; based on the available data we cannot draw conclusions about who is the biggest of the three.

** Mind the difference with the title of this blog post: the title reflects the fact that we cannot say that SF is bigger based on the Millward Brown poll, but that does not mean that SF is certainly not bigger. It might be. We don’t know.

11 thoughts on “Is Sinn Féin the biggest party according to new poll? No, no, no”