Elaine Byrne’s recent Sunday Business Post article which advocated that whistleblowers should be financially incentivised to give insider information, based on the US experience. 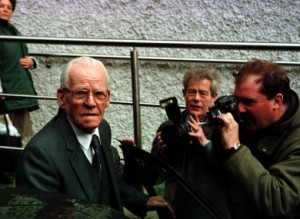 Whistleblowers are the lifeblood of every investigation. The more complex the crime, the more necessary their insider information becomes. The Mahon Tribunal was established because environmental campaigner Michael Smith and barrister Colm Mac Eochaidh co-sponsored a IR£10,000 reward for information leading to convictions for planning corruption. James Gogarty’s response brought others out of the woodwork. Tom Gilmartin’s cooperation with the Mahon Tribunal was instrumental in prematurely ending the career of Ireland’s most popular taoiseach of the modern era, Bertie Ahern.

Whistleblowers decontaminate the rot that builds up in the Augean Stables.

Though the reward offered by Smith and Mac Eochaidh was never claimed, I believe that Ireland should introduce financial incentives for whistleblowers to come forward. This was a key recommendation of the British banking inquiry published earlier this year. The Parliamentary Commission on Banking Standards called on regulatory authorities ”to undertake research into the impact of financial incentives in the US in encouraging whistleblowing, exposing wrongdoing and promoting integrity and transparency in financial markets”. The British Home Office is now considering proposals to pay whistleblowers for information on white-collar crime.

The US has paid whistleblowers since 1863.

The 1863 False Claims Act dates back to the US civil war and was a reaction by the federal government to fraud. The sponsor of the legislation, Senator Jacob M Howard, told the US Senate that his motivations for initiating the legislation was because he believed in ”the old-fashion idea of hold out a temptation, and ‘setting a rogue to catch a rogue,’ which is the safest and most expeditious way I have ever discovered of bringing rogues to justice”.

Whistleblowing in the American sense was conceived as a necessary evil. In return for information leading to economic fines, whistleblowers get a ”bounty payment” of 15 and 25 per cent of the overall settlement made as a consequence of their cooperation.

Kyle Lagow is one of the most famous beneficiaries of this scheme. Lagow, an appraisal manager for Countrywide Financial from 2004 to 2008, claimed that the sub-prime mortgage lender inflated the value of homes to support bigger loans. He filed his whistleblower suit alleging appraisal fraud in 2009. In 2012, he was awarded 14.5 million for his part in the mortgage industry’s 25 billion settlement with federal and state regulators. Not a bad return for the state.

The long-term consequences of this sub-prime mortgage fraud, Lagow’s attorney summarised, ”directly and indirectly cost the United States government billions of dollars and played an important role in the wave of foreclosures that fuelled the financial meltdown of 2008.”

Without whistleblowers like Lagow, the US authorities would have struggled to bring those responsible for this exceptionally complex fraud which devastated the lives of millions to justice.

The US went one step further in 2010.The Dodd Frank Act established the Office of the Whistleblower. See http://www.sec.gov/whistleblower which actively encourages people to come forward. With the click of a mouse, anybody can “submit a tip.”

The Office of the Whistleblower is operated by the Securities and Exchange Commission (SEC) which is more or less the equivalent of the Irish Financial Regulator.

The SEC defines an ”eligible whistleblower” as someone who voluntarily provides the SEC with “original information about a possible violation of the federal securities laws that has occurred, is ongoing, or is about to occur.” The information provided must lead to a successful SEC action resulting in an order of monetary sanctions exceeding 1 million.

The first award under the scheme was granted in 2012. The whistleblower got 50,000. The SEC said that as a consequence of the documents received, it allowed them to ”move at an accelerated pace and ultimately led to the filing of an emergency action in federal court to prevent the defendants from ensnaring additional victims and further dissipating investor funds.”

Other payments have since been made in fraud cases involving the Swiss financial company UBS, the British pharmaceutical GlaxoSmithKline and the hedge fund Locust Offshore Management.

It is anticipated that the rate of whistleblowing will increase as the public become more aware of the activities of the Office of the Whistleblower . Would this wash in Ireland?

The hostility to “informing” in Ireland still has a deep seated emotional resonance to a history that is no longer relevant. The personal cost of telling the truth was laid bare by Tom Gilmartin’s son in his moving eulogy to his father last month. Tom Jnr spoke of the ”extraordinary campaign of vilification” his father had endured for over a decade by media and politicians.

Those who speak out are labelled as traitorous informers. This in turns creates a fear of breaking the conspiracy of silence that characterised the scandals in every sector of Irish society.

The Smithwick Tribunal found that the Garda Siochana prioritised ”the good name of the force over the protection of those who seek to tell the truth”.

This is the same language that the Murphy Report into the Dublin Archdiocese used, where ”the maintenance of secrecy, the avoidance of scandal, the protection of the reputation of the Church” was valued above the welfare of children.

This cultural nonsense is what institutions and individuals use as an excuse to ”say nothing”.

There are two choices. Maintain the culture of silence or pay whistleblowers to break it. The Ansbacher tax scam and irregularities at Anglo Irish Bank are two reasons to be innovative and follow the US and, if the decision is made, the British example.

The greatest tax evasion scheme in Irish history, Ansbacher deposits, went back decades before it was unearthed by the McCracken Tribunal. It ultimately netted the state Euro 113 million in tax, interest and penalties. However, despite the 289 cases of illegality identified, not one person was prosecuted because, according to Revenue, these include ”some who were very elderly and deceased”.

Giving a whistleblower a cut of the €113 million would have brought those guilty to justice much sooner and perhaps have provided a greater financial return to the state.

If an Anglo Irish Bank employee had blown the whistle about lending practices and auditing standards in the mid-2000s would the state have had to bail out the bank for as much as it did? Why was it that the Anglo Tapes only came into the public domain five years after the bank guarantee?

Let’s get over notions of informing. Pay whistleblowers and clean out those Augean Stables that have yet to be discovered.