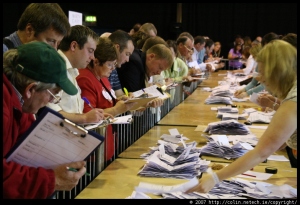 It’s all too easy after any election, no matter how slight the margin of victory, by however small a portion of the electorate, to declare that the result represents a mandate of some sort. When this isn’t merely spin, it’s often the product of wishful thinking, the hope that some clear intention is waiting for us to discover and act on. Indeed, both the winners and losers might desire this clarity so that each can move on with their lives.

But there’s no clear message from Friday’s referendum on the Seanad. Neither the triumphalism of the retentionists nor the despair of abolitionists is in order. The most radical reform of the Constitution in our history failed by a margin of only 3.4% of those voting. Of the 1,226,374 people who voted, the ‘No’ side won by 42,500 votes. It’s essentially as if it was a draw nationwide, but Drogheda said ‘No’. Obviously, the fiction of a mandate has positive benefits, not least in putting an end to further argumentation. But it shouldn’t be represented as expressing public opinion in any clear way. It must be honoured, of course. Unlike many on the ‘No’ side, I’m a real democrat. And I remain one even where, as in this referendum, the people make the wrong choice.

Although polls before the election had consistently shown an advantage for abolitionists, the ‘Yes’ vote was always softer than its opponents and, just as in other recent referenda, their lead melted in the final week of the campaign. The retentionist side was also always more passionate, not least among their middle class supporters. The latter are always more likely than others to vote in any election and this is especially true where, as here, they may’ve seen their own interests at stake.

The elitism of republics is indeed harder to see than that of aristocracies and monarchies. It’s quite natural, for elites and those that aspire to be, to confuse elitism with meritocracy. The Seanad may be the opiate of the professional classes. This is certainly the case for the lawyers and legal academics I rub shoulders with. Many hope one day to enter the inner sanctum, or, in this case, at least the Seanad’s less responsible outer sanctum. And if they can do so without condescending to represent the general public, kissing babies, or attending the Ploughing Championships, so much the better.

Indeed, the anti-democratic prejudices of many progressives in this debate was bitterly disappointing. Most of their great champions explicitly defended the bill authored by Senators Fergal Quinn and Katherine Zappone. That scheme perpetuates the chamber’s (i) vocational fiction that inherently undermines the one-person/one-vote principle, (ii) privileged treatment for those privileged enough to graduate from university, and (iii) patronage of appointments to the chamber.

And the ‘progress’ the bill introduces takes the form of a sort of untested, neo-vocationalism that harkens back to guild-representation of old. We’ll have a member perhaps for stonecutters, weavers, carpenters, etc, each currently underrepresented in the democratic process.

For all of the enthusiasm of elites who see the Seanad as a protection against majoritarianism and the great unwashed, the campaign joined them in a shotgun marriage with those who want nothing more than to tap into that majoritarianism, as the rightful guardians of the republic. It was an effective combination of betters on horseback and blackguards on foot. Indeed, the willingness of the progressive elite to perpetuate the unsubstantiated arguments of their allies was shocking. And I can only assume that there were a lot of deep baths taken after the campaign ended.

Of course, there were many other factors. The Taoiseach’s unwillingness to debate, though to do so would’ve represented a novelty for the office, had an impact, as did the absence or agnosticism of his allies. Perhaps most importantly, the lack of a positive message was a significant liability: a campaign that focused more clearly on abolition as part of wider reforms leading to a more egalitarian republic and a more direct democracy might have encouraged more to vote and to vote ‘Yes’.

But what does it mean?

The math, at least, is relatively easy. 39.2% of the electorate participated in the referendum. Of those voting, 51.7%, or 591,937 voters, voted ‘No’. That’s a little less than 19% of the electorate. Of course, some portion of that vote was cast in the hopes of reform. Other voters, including many of the traditional enemies of the coalition parties and many hurting financially, voted to object to the Government; the subject matter of the referendum mattered little. And some percentage, at least, was for the status quo, either because voters are happy enough with it or, more likely, they went for the devil they knew.

And just as many voted ‘Yes’ on the basis of the Government’s vulgar and ill-chosen cost argument, many ‘No’ voters were no doubt swayed by the misinformation of the ‘No’ campaign, an effort that happily clothed patronising paranoia in principle. In particular, the fear of a nefarious ‘power grab’ was likely the most potent political argument made, though it was rooted in hysteria and hyperbole. And the amendment’s unavoidable complexity meant that an individual’s doubt on any aspect of abolition, however unproven, could cause voters to hesitate and withdraw their support. Most critically for the referendum were the scaremongering shibboleths about Articles 27 and 29 of the Constitution and to changes in the impeachment of judges and the President.

And all of this was compounded by the confusion between constitutional reform and the use of the party whip, a topic almost entirely irrelevant to the referendum. It is true, however, that those spurned by the coalition in previous months suddenly re-emerged as allies to the Senators in a reform alliance of great personal and political convenience. The ‘Yes’ vote is somewhat easier to decipher, though even here it’s not straightforward. Again, a large percentage of ‘Yes’ voters no doubt believed in abolition, either on principle or because they bought the Government’s arguments.

Jaded by the failure of past reform efforts, they might now consider some sort of change to ameliorate, if not eliminate, the Seanad’s flaws. They might believe, not unreasonably, that there’s no better option.

Others, like me, believe that the Seanad is genuinely irredeemable and a distraction meaningful political reform. Unicameralism would serve our small republic more democratically. It might even have made our Deputies, and perhaps us, more responsible. It could have made our general elections more meaningful. Even now, as flawed and fantasy Seanads are still discussed, there’s the risk that all of us will take our eyes off the Dáil.

In sum, on the most generous estimate, some 10-15% of the electorate voted unequivocally for Seanad reform of some sort. Some portion of the other voters on both sides of the issue might now fall into line, though it bears mentioning again that if all of those who voted last Friday suddenly embraced Seanad reform, that total would still be less than 40% of the electorate-at-large. If democracy matters, this is hardly encouraging. It’s true, too, that other polls have shown that nearly the entire state believe the Seanad to be dysfunctional. But in addition to those who saw abolition as the only real reform, there also remain many different reform proposals, some of which are fundamentally contradictory and most of which are rather tame.

Prospects for reform have admittedly improved slightly, given Fianna Fáil’s embrace of the Quinn/Zappone bill. But this also reveals how little principle was involved for that party in this election. As everyone knows, Fianna Fáil supported abolition in the general election in 2011. They then produced their own reform proposal less than six weeks ago. In fact, their proposal was arguably the most radical, eliminating the vocational panels and university set-asides and modifying the Taoiseach’s nomination process. But as the campaign came to a close, they opportunistically embraced the Quinn/Zappone bill. It’ll be interesting to see how committed they’ll be to Seanad reform now.

In any event, the prospect of Seanad reform was always less likely than the ‘No’ side said throughout the campaign. The certainty with which it was declared was a combination of raw politics and self-deception. Each of the current proposals is problematic and it’s difficult to see how much better can be done. Meanwhile, the Seanad is no less undemocratic, elitist, and unnecessary than it was last week.

While the Senators celebrate, most of us—‘Yes’ and ‘No’ voters alike—think that they’ve failed and that the chamber is flawed. Indeed, only minor changes in the amendment, or in the campaign, might have delivered a very different result. Neither the Government nor the Taoiseach should panic. But it might already be too late for such advice.

4 thoughts on “The people have mumbled. What was it they said?”