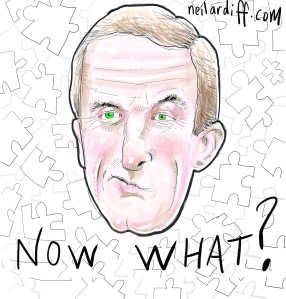 Enda Kenny won today’s confidence motion, it is said by a margin of six votes. So he will be relieved and Richard Bruton disappointed. But might the happiest people as a result of this be Brian Cowen and Eamon Gilmore? Cowen now faces an opposition leader shorn of his most talented TDs. Gilmore will be able to say he’s the real leader of the opposition. Kenny will no doubt get a bump in the polls as he displayed fighting qualities and tactical nous to save his position, but he hasn’t won the country over, just his party. Kenny will face constant questions about the fact that almost half his parliamentary party (arguably the better half) had no confidence in him. The problems that Kenny had won’t be solved by this. Kenny needs to reunite the party quickly, but how can he do this?