The geography of Fine Gael support offers some insight as to why Enda Kenny survived the challenge to his leadership today.  The party’s strength in rural, and especially western, parts of the state, relative to its weakness in Dublin, saw high numbers of Fine Gael TDs, MEPs and Senators being elected from these areas, many of whom proved to be Kenny supporters in the leadership contest. Had Fine Gael won more seats in 2007 in the eastern and more urban parts of the state, where the Bruton supporters tended to predominate, the result of the leadership poll could have been different. 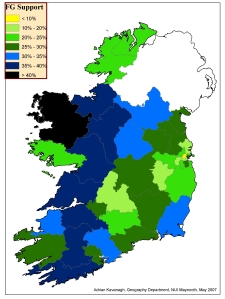 While the party was vieing for dominance in Dublin with Fianna Fail in the early 1980s, winning similar support levels (averaging in the mid to high 30s) to what it was winning in Leinster, Connacht-Ulster and Munster, Fine Gael support in the capital declined dramatically from the 1987 General Election culminating in the party winning a mere 14.5% of the vote in the capital in 2002. 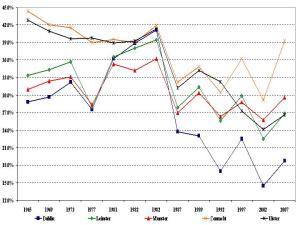 Although Fine Gael support in Dublin improved (by 4.3%) in the 2007 contest, this election maintained the trend during the Ahern era of Fine Gael consistently winning less than half the amount of votes of Fianna Fail in Dublin.  Fine Gael weakness in the capital contrasts with the party’s support levels in the rest of country, but most notably in Connacht where the party outpolled Fianna Fail in the 2007 contest.  To some degree the party is almost returning to its support patterns of the mid 1960s when Connacht proved to be its strongest region relative to the rest of the state, while the party has consistently failed to gain significant tractions amongst Dublin voters in all elections since the peak of the Fitzgerald era in the early 1990s. 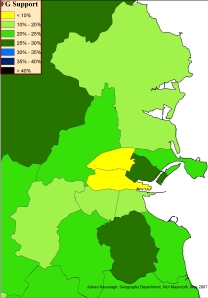 In terms of competing with Fianna Fail at the next general election, the geography of support of the Kenny-led Fine Gael dovetails well with that of the Labour Party – Fine Gael is strong in the regions where Labour is weak (as discussed in a previous post as well as a shorter post from the Kavanagh blog) and vice versa. Thus Fianna Fail is likely to face a serious challenge from Fine Gael, and not Labour, in its rural strongholds come the next election, while Labour, and not Fine Gael, will be likely to eat into the Fianna Fail urban working class support base. The result of today’s contest may ultimately prove more harmful to Fianna Fail’s hopes of holding power come the next election. While a Bruton victory may have bolstered the party’s Dublin prospects, on the other hand a Bruton-led Fine Gael may have its scope to make gains in Dublin being limited by the strong likelihood that the more virulent gusts of a “Gilmore gale” will be experienced in that region, while also failing to further erode the Fianna Fail Dublin support over and above that which would be achieved by Labour. In short, the opportunity space  for gains in Dublin by a more urbanite Fine Gael might well be closed off by the strength of Labour in Dublin at the next election. On the other hand, Fianna Fail may, in a parallel with the 1992 results, manage to achieve a respectable result by a strong showing in rural Ireland, holding their own and possibly gaining some seats if competing against a more urbanite Fine Gael.