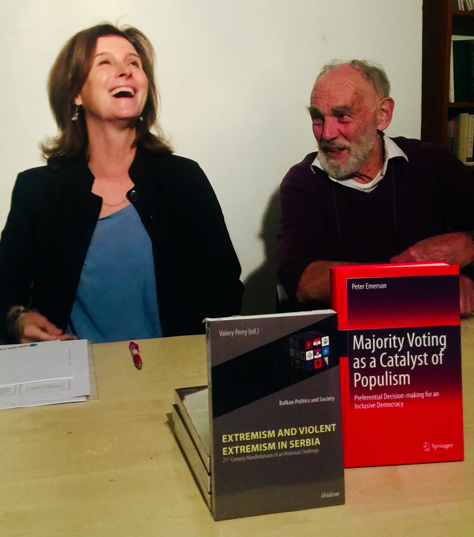 (above book launch in Sarajevo)

Just published, Majority Voting as a Catalyst of Populism (Springer, Heidelberg)  —  https://www.springer.com/gb/book/9783030202187  —  is a critique of binary decision-making.  Binary politics are everywhere: in the Dáil although there are better methodologies; in referendums as in Brexit, which was crazy; in Northern Ireland, where the very cause of the Troubles was binary majority rule; in Germany, where despite Hitler and all that, they still believe in 50% + 1; in the Balkans, where “all the wars in the former Yugoslavia started with a referendum,” (Oslobodjenje, 7.2.1999); in Russia, where the word for ‘majoritarianism’ is (or at least was) ‘bolshevism’ (but out of embarrassment, they have now concocted a new term. ‘majoritarnost’); and in China, where one of the world’s worst examples of binary politics was Máo Zédōng’s anti-rightist campaign.

The word ‘vote’ is sometimes regarded in China as another ‘western’ word.  But voting was used in the Imperial Court during the Former Hán Dynasty, over 2,000 years ago, albeit in a very limited franchise: the Emperor’s Ministers.  There again, this should come as no surprise, because China invented pretty well everything else as well… although in this instance, they actually came second: the Greeks beat them by a century or two.

Furthermore, voting is used today in the villages, to elect the local council.  Hú Jǐntāo wanted to extend these to the towns, but Xí Jìnpíng said no.  The Communist Party nevertheless still uses votes, and Xí was elected to the post of General Secretary by 2952 votes in favour to 1 against, and 3 abstentions.  Other decisions have been much closer, and in 1989, Tiān’ānmén Square, the Politbureau Standing Committee’s vote to send in the tanks was a binary decision won, it is said, by just one vote.

In September 2017, the author travelled, surface of course, across Europe to Iran; from there he hoped to continue overland, but the Turkmenistan visa section was just too much, so he flew to Urumqi and continued by train from there, with visits to Hong Kong, Taiwan and North Korea.  He arrived back home in Belfast in September 2018, in all, one year on the road.

Xīnjiāng today is just like Belfast was in the ‘70s.  The police are everywhere; ‘land rover’ patrols go ‘wah-wah, wah-wah’ the whole time; you get body-searched every time you go to a shopping centre or whatever; and there are stop-and-search patrols all over the place.  As I say, just like Belfast.  At a guess, however, there are more Uighur serving in the local police than there were Catholics in the old RUC.  (I should perhaps add that I was ‘arrested’; I was cycling on my little Brompton out to the Turpan railway station, when two policemen decided I was far too old to do that, so they bunged the bike in the back and gave me a lift.)  The situation, of course, is complex; there are the camps on which several reports have commented and which I did not see; secondly, there are Uighurs living in Beijing, of whom we hear little.  The main point of course is this: there are several minorities in Xīnjiāng, and any talk of a single binary referendum for just one of them would be at least silly, at worst, downright dangerous.  Not for this reason alone, those who talk of binary referendums in Scotland and Taiwan etc. should desist.

But back to the journey.  I gave a TEDx talk in Vienna  —  www.deborda.org  —  and lectures in many universities and colleges on the way, in Sarajevo, Tbilisi and Tehran, and then too in China, both on the mainland and in Hong Kong and Taiwan; (I speak Russian well, Serbo-Croat not so well, and Chinese even less).  I returned on the Trans-Siberian via Mongolia, where I’d served as an OSCE election observer.  One year later, the book is out, and I’m travelling again, this time entirely overland, with book launches in many jurisdictions on the way.

The text, yes, is a critique of binary decision-making and binary majority rule.  It also advocates a more inclusive system: the Modified Borda Count, MBC, and all-party power-sharing, everywhere.  After all, to have a situation where just one person – Trump, Bolsonaro, Johnson, Xí – is all-powerful, is bad for the planet. 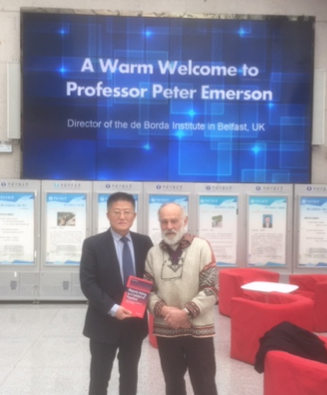 The book launch in Xúzhōu

Now the best way to talk about inclusive decision-making is, of course, to demonstrate it, so in workshops in universities in Moscow, Beijing and Xuzhou, I asked participants to use electronic preferential voting.  In Moscow, the topic was serious: choosing a good decision-making methodology, and then using that to decide on a good electoral system.  In China, one has to be a little more sensitive, so here the students were asked to choose their favourite film-stars.  In both countries, however – the Chinese firewall notwithstanding – everybody was able to access the ballots – www.debordavote.org – to vote, and then to wait for a nano-second for the results.  Full reports are on www.deborda.org

Next stop North Korea, where as per their constitution, they too believe in majority voting.  They have elections as well.  They’re all a bit silly of course: the voters are given a choice of “Candidate X, yes-or-no?” and the people vote ‘yes’ in 100% turnouts.  It’s farcical.  Elections of course should be multi-candidate and ideally, as in Ireland, preferential: PR-STV or even better, the Quota Borda System, QBS.

But before we criticize the DPRK too severely, we should remember that we are not much better when it comes to decision-making.  The UK could be in the EU, the EEA, the WTO or whatever.  The choice was, or should have been, multi-optional.  But in the 2016 referendum, it was all reduced to an “Option X, yes-or-no?” type question.  It too was farcical.  OK, there was a majority against being in the EU.  But there would probably have been an even bigger majority against being in the EEA, and bigger still against being in the WTO.  Unfortunately, while it does believe in multi-candidate elections, Britain’s Electoral Commission does not believe in multi-option voting.

But maybe, one day, the Dáil will use electronic preferential voting, either MBC and/or Condorcet. Maybe too, as recommended by the Citizens’ Assembly, Ireland’s referendums will be multi-optional if not also preferential; and maybe as well, Northern Ireland’s Assembly will use a matrix vote to elect its Executive.  And maybe everybody will stop using binary decision-making if and when, as in politics, at least in any pluralist democracy, contentious problems are not binary, so such should not be reduced to a binary ballot, or even a series of dichotomies.  Politics, after all, is the art of compromise; majority voting does not cater for compromise; but the MBC is robust, inclusive, accurate, and most importantly, non-majoritarian.  Well worth a train journey or few.