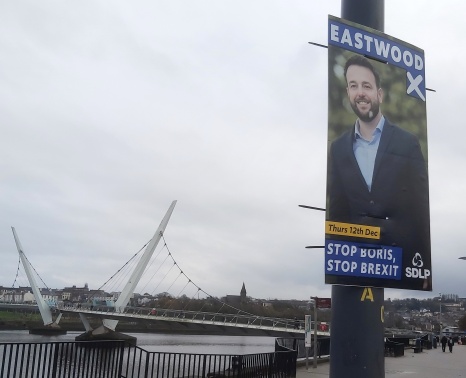 As the centenary of Ireland’s division approaches Brexit has pushed the issue of the border to the forefront of politics in Ireland and the United Kingdom. Many believe that this election vote will be used as a proxy for a border poll in Northern Ireland and therefore there has been a strong push to get the vote out and minimise the chances of seats being lost to the other community. Tribal politics dictates that there are very few constituencies that change hands between a nationalist and a unionist party. The main competition in these “safe” seats is usually within the nationalist or unionist community rather than between them. In this election, tactical voting will be crucial in key marginals as will the unprecedented formal and informal inter-party pacts.

The safe seats held by the DUP include East Antrim, East Londonderry, Lagan Valley, South Antrim, Strangford, and in Upper Bann where the sitting MP has stood down as a result of an extra-marital affair and made way for a party colleague. Ian Paisley has been plagued by more scandals during this recent term of office than many can pack into a parliamentary career, but his unionist base makes him almost unassailable in North Antrim, the seat he inherited from his better-known father of the same name.

Safe Sinn Féin seats include Newry and Armagh, Mid Ulster, West Tyrone and West Belfast. The party will struggle to fend off a challenge from the SDLP to regain the solidly nationalist seat in South Down. It also faces a challenge from the UUP in Fermanagh and South Tyrone where the sitting Sinn Féin MP has to compete with an SDLP contender for the nationalist vote while facing a solitary unionist candidate (the DUP has stepped aside). Recent votes in this constituency have been remarkably close. In 2010, Michelle Gildernew won the seat by just 4 votes – the closest result in the UK since 1966 – and the seat switched hands in 2015 and 2017 with only a few hundred votes determining the outcome. That said, the republican party is likely to retain both seats.

In South Belfast, the SDLP’s Claire Hanna is almost certain to take the seat from the DUP incumbent Emma Little-Pengelly as Sinn Féin’s Máirtín Ó Muilleoir and the Green Party’s Claire Bailey have stood aside to facilitate such an outcome. The vote in this constituency has been notoriously fragmented in recent elections. In 2015, Alasdair McDonnell took the seat with a mere 24.5% of the vote, the lowest ever vote share recorded by a successful MP in any part of the UK. When Little-Pengelly edged past McDonnell in 2017, assisted by tactical voting by UUP supporters, she did so with only 30% of the vote. Although South Belfast had voted by 70% to remain in the EU, Little-Pengelly articulated the ardent Brexiteer line of her party and this has triggered the unprecedented pact to oust her. Assuming the bulk of the Sinn Féin and Green vote (16.3% and 5.1% respectively in 2017) transfer to Claire Hanna, the DUP’s brief occupancy of this seat seems destined to end on 12 December.

The DUP hopes to make up for this loss in North Down where Sylvia Hermon is stepping down after 18 years at the helm, first as an MP for the UUP and, since 2009, as an independent unionist. The DUP had been chipping away at her majority in recent elections and irrespective of whether Hermon stayed on or not, it had been the party’s top target for gaining a Westminster seat. The outcome will hinge on the destiny of Hermon’s vote, much of which was personal and based on her liberal unionist position. The Green Party, Sinn Féin and the SDLP, which took only 3500 votes between them in this solidly unionist constituency, are not contesting this time in order to boost the chances of the Alliance Party’s Stephen Farry. While hoping to capitalise on North Down’s pro-Remain majority (52.4% in 2016) he faces an uphill battle and the DUP remain favourites to take the seat.

There will be an almighty battle in Foyle, a constituency based on the city and hinterland of Derry. Colum Eastwood is likely to shade it and retake the seat the SDLP held for 34 years but lost to Sinn Féin’s Elisha McCallion in 2017. The margin to be overturned is only 169 votes. Much will ultimately depend on how many votes – and from whom – Ann McCloskey takes on behalf of the new Aontú party, a breakaway from Sinn Féin formed mainly to oppose the party’s support for legislation permitting abortion. McCloskey’s candidature is likely to hurt Sinn Féin more than the SDLP. For one thing, both Aontú and the Sinn Féin are abstentionist parties and, secondly, the SDLP has emphasised that whereas Sinn Féin are resolutely in favour of legalising abortion and have expelled members who deviate from this policy, there is a place for all opinions on the issue within the SDLP.

This election will most likely inject some momentum into the SDLP, which has been on the backfoot since being eclipsed by Sinn Féin in 2003. When Colum Eastwood took over in 2015, he had the dubious distinction of being the fourth leader of the party in five years. Eastwood’s three predecessors – Mark Durkan, Margaret Ritchie and Alasdair McDonnell – all lost their seats in the 2017 election, leaving Westminster without an Irish nationalist voice for the first time in over half a century. Ritchie has since brought additional embarrassment to the party by accepting the title Baroness Ritchie of Downpatrick from the Conservative Government and taking a seat in the House of Lords, against party policy. The party’s loose alliance with Fianna Fáil, unveiled earlier this year, has failed to produce obvious dividends.

North Belfast is too close for anyone to call. In this constituency the city’s Lord Mayor John Finucane of Sinn Féin is challenging the DUP’s deputy leader and parliamentary leader at Westminster, Nigel Dodds. Both the DUP and Sinn Féin are pulling out all the stops. While every year the demographics edge in favour of nationalist parties, to win Finucane would have to receive most of the 2700 votes garnered by the SDLP and Greens in 2017. The campaign in North Belfast has been bitter and unsavoury. Initially, the UUP announced that they would contest all constituencies in Northern Ireland, but ultimately backed away in North Belfast having been subjected to intense pressure, including, it was widely reported, from loyalist paramilitaries. The UDA leader who planned the murder of solicitor Pat Finucane has behind sinister banners placed on Belfast’s Shankill Road attacking his son, the current Lord Mayor. For nationalists, a victory here would decapitate the DUP at Westminster and inflict a major price on the DUP for its hardline Brexit stance. For many Dodds supporters, it’s not just his seat that is in danger, but the Union itself.

The Alliance Party, which is the only major party standing in all 18 constituencies, are hoping to capitalise on a recent surge in support. In May, Alliance Party leader Naomi Long became the first ever Alliance MEP, dislodging the UUP on a clear pro-Remain platform, and the party gained 21 seats in local council elections. Naomi Long has an 8000-vote deficit to overturn in East Belfast where Sinn Féin, the SDLP and the Greens have stood aside in order to boost her chances of regaining the seat she held from 2010-2015. However, their combined total numbered only 1600 votes in 2017 and the fact that nationalists have stepped aside to help Long could prove counter-productive amongst unionist voters.

During this election there has been a loyalist campaign, designed to support the DUP, which proclaims that a vote for the Alliance Party is an endorsement of a pan-nationalist front, which includes Sinn Féin and the SDLP. Posters and banners have been erected in East Belfast and North Down depicting Sinn Féin and Alliance as part of an ‘unholy’ coalition. A ballot cast for Alliance is a vote for ‘Sinn Féin/IRA’, the banners claim, before ending with a final plea –  ‘don’t let the IRA have the last laugh’.

The DUP’s hard-Brexit stance in Westminster, where it mispresented the preferences of the Northern Ireland electorate, has created new and previously unlikely alliances in the region. However, while ostensibly billed as ‘the Brexit election’, this contest contains many familiar features of the North’s parochial politics. For a substantial section of the electorate the vote will have a bearing on prospects for a referendum on Irish unity. Should the DUP lose North Belfast to Sinn Féin – as is entirely possible – and other predictions hold, then voters will have elected an equal number of unionist and nationalist Westminster MPs for the first time since partition was imposed a century ago.

*Donnacha Ó Beacháin is Associate Professor of Politics at the School of Law and Government, Dublin City University. He is the author of From Partition to Brexit: The Irish Government and Northern Ireland