With the focus now firmly on government formation, academics and political number crunchers are also trying to discover why Irish people voted the way they did on 26 February 2016. The election resulted in one of the most diverse Dáils in the history of the State being elected, with a plethora of independents and smaller parties taking their seats in Leinster House. It also saw the incumbent coalition going down to defeat despite an economic climate which seemed to favour their re-election. To help us in this endeavour, we are fortunate to have two exit polls which allow us to study those who voted and some of the reasons motivating their choice.

Another valuable source of information about the wider public’s attitudes on social and political matters in the lead up to Election 2016 is Eurobarometer (EB), a cross-national survey of public opinion in the EU’s 28-member states. Yesterday, it released its annual country report on Ireland, Eurobarometer 84 which explores the public’s views on a wide selection of topical issues including Irish people’s attitudes to the EU and their views on the unfolding European migrant crisis. However, it is the report’s consideration of the public’s attitudes to domestic matters that might be of interest to those wishing to understand the mood of the Irish electorate as they prepared to vote. Behaviour and Attitudes conducted the fieldwork for Eurobarometer 84 among a representative sample of 1,004 Irish people in November 2015. And while the data was collected three months before voters went to the polls, it still offers us an interesting insight into the mood of Irish people as they weighed up how to vote in Election 2016.

The domestic element of EB84 first focuses on Irish people’s perceptions of the economy. As of November 2015, the data reveals that for the first time since the Global Financial Crisis (GFC) hit in 2008, most Irish people (57%) rated the Irish economy as ‘good’. Having lagged behind the EU average on this metric throughout the GFC, Irish people’s positive assessments of the economy are now above the EU average, which currently stands at 41%. Meanwhile, the numbers of people rating the Irish economy as ‘very bad’ fell to their lowest levels in eight years. Only 8% described the economy as ‘very bad’, a decline of 76 points compared with its peak in November 2010.

The positivity about the economy does not end there, with Irish people also expressing strong levels of confidence about their personal economic situation: 73% described the financial situation of their household as ‘good’ and nearly two-thirds (65%) classified their personal job circumstances as ‘good’. When asked about their expectations for the next twelve months, there was a large degree of optimism with 51% saying they expected the Irish economy to get ‘better’, while 54% thought the employment situation would improve, above the EU average on both metrics. Few people thought circumstances would worsen. Irish people were also more positive about their personal economic situation for the coming year compared with their EU counterparts, with a majority of individuals feeling their personal lot would improve or stay the same in 2016, and only a minority feeling it would deteriorate. Also, 64% of Irish people expressed agreement with the view that Ireland is going in “the right direction”, the largest proportion of support for this statement since spring 2006, meaning Irish people are the most optimistic about their country’s prospects in the entire EU. In sum, it appears that on the eve of the election, there was a sizeable amount of economic optimism in the air. Classic economic voting theory suggests that when the economy is performing well, the government’s chances of re-election significantly increase. On a first glance at these data coupled with the many aggregate level statistics which suggested the economy was improving – such as declining unemployment, strong levels of economic growth, and a reduction in the national debt – one might have inferred that the re-election of the Fine Gael/Labour coalition in 2016 was a ‘slam dunk’. But as we know, the outgoing coalition suffered defeat, with Fine Gael and Labour losing 56 seats between them and achieving only a joint 32.1% of the first preference vote, a 23 percentage point decline on their combined 2011 vote. So how did the Coalition not win the election despite an improving economy and a public that on the surface appeared to be increasingly confident about the economy and Ireland’s future prospects?

Digging deeper into the EB84 data shows that notwithstanding a re-emergence of economic confidence, there were clear signs that it was far from universal. Fifty-two percent of people still considered the current employment situation in Ireland to be ‘bad’ while a sizeable plurality of people (40%) still thought the economy was performing poorly. Moreover, at the individual level, 1 in 2 Irish people said they had difficulty paying their bills either ‘some of the time’ or ‘most of the time’, noticeably above the EU average of 36%. A multivariate analysis probing who felt the economy was performing well compared with those who didn’t showed that those who struggled to pay their bills, along with women, and those who expressed distrust in the Irish government (a sizeable proportion of Irish people as we shall see later) were all less likely to think the economy was performing well. In sum, what the EB84 data shows is that while economic confidence has returned to an extent, it is not universal, nor without qualification, and a sizeable chunk of voters have yet to feel the economic feel-good factor. This might suggest that the Fine Gael slogan in Election 2016 “Keep the Recovery Going” misjudged the fact that while many Irish people are beginning to acknowledge the improving macro-economic situation, for sizeable proportions, the effects of the GFC are still very much biting. EB84 thus provides some background as to why the outgoing coalition failed to reap the dividends of favourable macro-economic circumstances.

Moving to the another significant characteristic of Election 2016: the number of non-party candidates elected to the 32nd Dáil – 23 in all if we combine the Independent Alliance’s six deputies with the 17 other non-party TDs. This represents the highest number of non-party members ever elected. The significant number of non-party affiliated members elected and their increased vote share this time around raises the question of what lies behind their electoral success? There are likely to be many reasons, some idiosyncratic to particular constituencies. One persuasive reason for the general fragmentation of Irish politics (and by consequence the increased number of Independents) is that Irish people are much less anchored to political parties than they once were, with just over 1 in 5 people in the 2011 Irish National Election Study (INES) saying they felt ‘close’ to a party. However, the decline in party attachment in Ireland has been a long-term phenomenon and it is unlikely that this explains the sudden increase in the number of non-party members elected in 2016. Data from Eurobarometer 84 offers a more persuasive clue. The report shows that Irish people’s trust in political institutions is at near all-time lows. Figure 1 (it is in fact Figure 2 in the EB84 report, see p.5) tracks the confidence levels people have in three national institutions dating back to 2004: the Dáil, the government, and political parties. It details an index of trust calculated by taking the number of people who expressed distrust in these institutions from the numbers who expressed trust in them. A negative score means more people distrust the institution, while a positive score shows more people have trust in it. What we see is that Irish people have tended to have greater levels of distrust than trust in these institutions, but that trust has eroded even further since the onset of the Global Financial Crisis, and are near all-time lows. This is the case for political parties especially, which is the most distrusted of the three political institutions. As of November 2015, the score for political parties on the trust index is -68 (13% ‘trust’ and 81% ‘distrust’), while the government and the Dáil register scores of -41, and -38 respectively. While there has been a tendency for Irish people to be skeptical towards political institutions, the significant declines concurrent with the GFC are particularly noticeable. 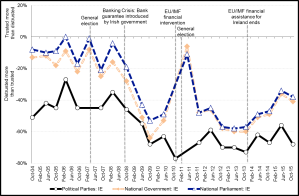 Of course lack of trust in institutions could be interpreted in two different ways. On the one hand, having a citizenry that takes a critical stance towards political institutions might be considered a boon as it provides checks and balances that are needed in a functioning democracy. Thus, distrust might simply reflect a judicious approach on the part of citizens – a sort of “keeping a watchful eye on the rascals”. Conversely, it might be viewed more negatively as being symptomatic of a wider malaise about the country’s political system, as was alluded to in Dáil Eireann’s first sitting on Thursday by Ceann Comhairle candidate Maureen O’Sullivan. Taking into account these public sentiments and the election outcome, we might conclude that with confidence in Irish political institutions so low, it is hardly surprising that the most diverse Irish parliament in many decades has been elected, and that with trust in political parties especially low, that it is not that astonishing that a large bloc of TDs in the 32nd Dáil are Independents.

Further and more sophisticated investigations are needed to understand the reasons motivating vote choice in the 2016 Irish general election, and to determine the impacts of the factors that have been identified here. However, Eurobarometer 84 gives a descriptive glimpse into the feelings of the Irish people on the eve of the general election and provides much needed context in helping us understand why voters delivered the result that they did on 26 February 2016.

Dr. Stephen Quinlan is Senior Researcher at the GESIS Leibniz Institute, Mannheim and is project manager of the Comparative Study of Electoral Systems (CSES) project (www.cses.org). He authored the Eurobarometer 84 Report on Ireland on behalf of the European Commission Representation in Ireland.

One thought on “Understanding Election 2016: Perspectives from Eurobarometer 84”