By Rory Costello, University of Limerick

Government formation is not just a numbers game. Political parties campaign to a large part on policy, and we must assume that people who vote for a party do so as an endorsement of those policies. If we view the new Dáil as representative of the spread of views in society, then the government that forms should be positioned near the ideological centre of the Dáil. Anything else would not be a fair reflection of the will of the people as expressed in the election.

So where is this centre point? Much of the discussion in the media has been about the similarity of the two biggest parties, Fianna Fáil and Fine Gael. This is certainly true, but it is also the case that Fianna Fáil positioned itself to the left of Fine Gael in this election on the key issues. This is evident both in the respective focus of the two parties campaigns (Fine Gael emphasised tax cuts while Fianna Fáil prioritised spending on public services) and in their positions on the key issues (e.g. Fine Gael promised to abolish USC for everyone, while Fianna Fáil promised to scrap the tax only for low and middle income earners). 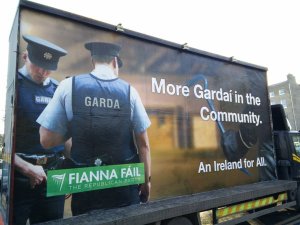 If all parties honoured their commitment to voters to seek to implement their policies, then the natural outcome of the negotiations would be a government in which Fianna Fáil played a central role. All parties would look to Fianna Fáil as the party to do a deal with. Fine Gael would view Fianna Fáil as their most natural partner; and so too would parties on the left. If AAA-PBP and Sinn Féin genuinely wanted to achieve something on water charges or housing, for example, then they would make an offer to support a Fianna Fáil-led government on the condition that it suspended water charges (which after all is the Fianna Fáil position) or committed to a social housing programme.

Under these conditions, it would be ultimately up to Fianna Fáil to decide the shape of the next government. They could come to a formal arrangement with either parties on the left or the right, or they could seek to form a minority government that would rely on the support of Fine Gael on some issues and left-wing parties on other issues. Either way, government policy would be close to what is sometimes called the ‘median voter’, which for many democratic theorists is the most democratically justifiable policy outcome.

So why is a Fine Gael-led government (either as a minority government or in coalition with Fianna Fáil) the only option being discussed in the media and by politicians? A clear majority of people voted for parties to the left of Fine Gael, so it should not be a foregone conclusion that Fine Gael will lead the next government. The reason why this appears likely is that several parties have washed their hands of the whole thing. Both Sinn Féin and the AAA-PBP have ruled out negotiating with the ‘civil war parties’, and have suggested that Fine Gael and Fianna Fáil should form a government.

Of course, this may be in the long-term strategic interests of those parties. But it is a clear abandonment of their voters, who elected them based on their policies. Once in opposition, these parties will have little or no influence over government policy, yet this is exactly where they seem to want to be. The implication is that the parties do not actually care about the policies they campaigned on, but are more focused on their own long term interests. By standing aside from government formation negotiations, they will guarantee that government policy will be to the right of the median voter.

10 thoughts on “Which government best reflects the ‘will of the people’?”