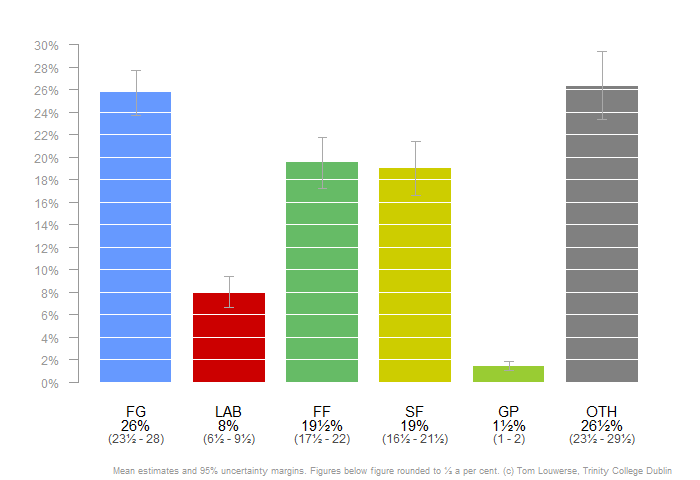 About five months out from the expected date of the general elections, Fine Gael continues to lead in the opinion polls with around 26% support. While the party is down about 10% compared to the last general elections, its competitors are fragmented and therefore Enda Kenny’s party manages to continue its lead. This is estimated by the Irish Polling Indicator, which aggregates the results of the four major Irish polling companies.

A group of ‘Others/Independents’ together receives around 26.5%, but this is a very fragmented group. Polling companies have only recently begun to report a breakdown for this group, which shows a very scattered field: Independents, including the Independent Alliance, seem to receive support from about 10-24% of decided voters, depending on the pollster. These are hugely varying estimates, suggesting that many people in this category have not really made up their mind. In the Ipsos MRBI poll, which reports the most specific breakdown, 16% per cent of those who say they will vote for one of the ‘Others/Independents’ is unsure which group (or none) their preferred candidate belongs to.

The left-wing combination AAA-PBP is supported by 7% in a recent Behaviour & Attitudes poll, about 4% the Ipsos MRBI September poll, although much lower scores were recorded by Red C (less than 2%). Renua is at 2-3% with B&A and Ipsos, but is not separately mentioned by Red C (which implies support of less than 2%). The Social Democrats are on about 1-2% according to most recent polls. The Green Party, which reported separately in all polls and in the the Irish Polling Indicator, receives about 1.5% support in recent opinion polls. 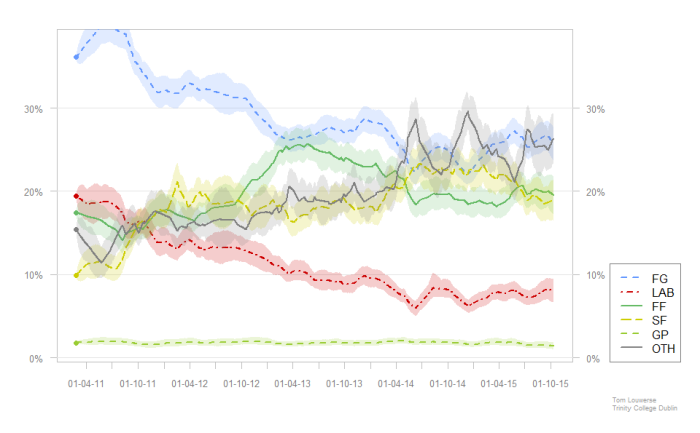 Fianna Fáil and Sinn Féin both receive support of around 19% of the voters. While Fianna Fáil’s percentage is estimated to be slightly higher (19.5%), the difference between the two parties falls well within the margin of error. For Sinn Féin this means a drop in support compared to last year and early this year, when their support was about 4% higher than it is now. Still, the party is polling much better than its previous election result (9.9%). Labour is estimated at around 8%, which is comparable to its level of support since January.

Support for most parties has been relatively stable over the past six months. The three per cent drop in support for Fine Gael that was reported after the publication of a recent Behaviour and Attitudes poll, results in only a one per cent drop for FG in the Polling Indicator. The reason is that this is merely one poll and the probability that the change is due to random (sampling) error is quite large. The B&A poll had 912 respondents, but only 587 of those were included in the breakdown for the headline figures. This means that the 3% drop for Fine Gael has a margin of error of plus or minus 5%. As a result, the change in support for Fine Gael falls within that margin. Despite B&A mentioning the statistical insignificance of this move in their report (p. 24), several media outlets, including RTE, TheJournal.ie, and Independent.ie, incorrectly suggested that the poll showed a drop in Fine Gael support (and an increase in Labour support).

The full results of the Irish Polling Indicator can be explored on pollingindicator.com. This website also contains a detailed description of the method used to combine the opinion polls.