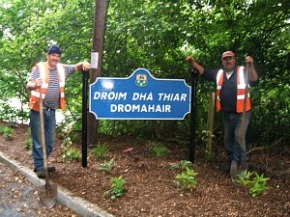 A reformed local government system in Ireland has a key role to play in promoting territorial development and competitiveness.  Earlier this year, Ireland’s LEADER Partnerships undertook extensive and in-depth consultation with citizens in several counties.  As a result, and following liaison with the European Commission, OECD and academic experts, they advanced a policy document that detailed how both local government and local development in Ireland should be strengthened and mutually re-enforcing.  This policy position paper has been endorsed by several public representatives and was formally launched by Ireland South MEP, Phil Prendergast in June.

The LEADER Partnership proposals centre on strengthening the planning process, whereby municipal plans are formulated from the bottom-up and are multi-sectoral.  Planning needs to be visionary and move far beyond traditional land-use planning.  Given their track-record in enabling integrated community development, LEADER Partnerships have offered to act as the enablers of a reformed planning process.  Multi-sectoral municipal plans would then be drawn together at county and cross-county levels, with the local authority providing technical inputs in areas such as engineering, biodiversity, housing and environmental resource management – thereby drawing on the strengths and expertise of local government.  The current draft of the Local Government Bill recognises the need for community-led planning and LEADER Partnerships welcome this.  However, the relevant sections of the bill need to be clear that planning should be multi-annual and multi-sectoral.  Annualised planning needs to be avoided, as it only promotes short-termism and leads to resource wastages.

In order to promote the successful implementation of area-based, integrated, multi-sectoral plans that have been driven from the bottom-up, facilitated by LEADER Partnerships, enhanced by local authorities and approved by LEADER Boards and Local Authority Members, it is necessary to put the LCDCs (Local Community Development Committees) firmly in the driving seat in overseeing their implementation, review and evaluation.  Moreover, local authorities would play a lead role in engaging with the statutory sector, so as to co-ordinate their inputs into the plan (formulation and delivery).  Therefore, each of the incoming LCDCs ought to be given the status of a Commission – as outlined in the LEADER Partnerships’ policy document.  The Commission should have the power and authority to coordinate and oversee the inputs of all public sector bodies in contributing to, and delivering on the agreed plan.  This would be a major advance on the role previously envisaged for the County and City Development Boards.  In order to optimise its effectiveness, the LCDC needs to be independent of, and owned by the totality of its membership – unlike the CDBs, which as the INDECON evaluation thereof noted, were delimited by the state sector’s perception of them as being subservient to local authorities. Therefore the bill needs to provide for and specify statutory sector membership of the LCDCs.

The bill needs to provide for greater flexibility and innovation in the geographical delineation of areas covered by the LCDC and planning. Counties should be permitted, and in the case of the border region, encouraged to include membership from adjoining local authority areas, including institutions that are based in Northern Ireland.

The focus on community in the bill is very welcome, and this represents an important step towards enabling citizens to input into and support the planning system.  However, the bill needs to be crystal clear that the proposed LCDCs in their oversight of the implementation of planning are not overseeing civil society or partnership bodies exclusively or unnecessarily (or that wold reduce social capital), but are operating vertically as well as horizontally, and are responsible for the totality of statutory and non-statutory inputs into the formulation and implementation of the plan.  The bill also needs to provide for the independent and external evaluation (ex-ante and ex-post) of each plan.

Regional authorities (assemblies) ought to be assigned a specific brief in ensuring inter- and intra-regional collaboration in the implementation of plans, and should be responsible for ensuring plans are proofed (rural) and are consistent with the incoming National Spatial Strategy.