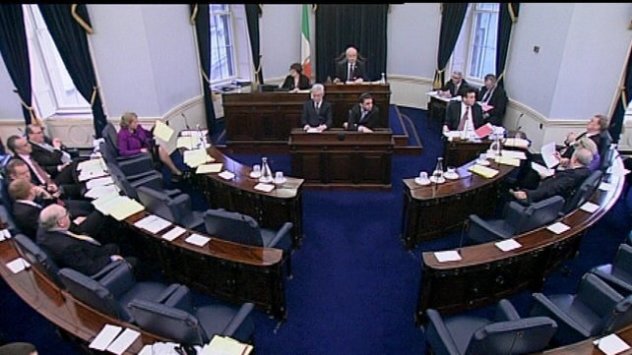 Predictably if depressingly, the debates around the Government referendum on the abolition of the Seanad have proven to be as ideological as intellectual, often more sophomoric than substantive. The vote honours a political promise initially made by parties and personalities now on both sides of the issue. Most of the membership of Fine Gael and the Labour Party, allied in this instance with strange bed-fellows Sinn Féin and the Socialist Party, want a YES vote. Fianna Fáil, who led coalition governments for the fourteen or so years before the debacle of the last general election only two years ago, are now campaigning for a NO result. Ghostly voices from their partners past—the defunct Progressive Democrats and the decimated Green Party—can also be heard whispering ominously from the grave. Former Fianna Fail spin doctors are engaged as well, though far more loudly, competing as they are with the wingnuts and Chicken Littles who always appear at referenda.

Many of those in the NO camp, not least Micheál Martin of Fianna Fáil and Michael McDowell, fFormerly of the (former) Progressive Democrats, have themselves suggested abolition in the past. A change of mind can, of course, be principled. But there’s little sense of principle in the partisan moaning that has characterised the debate so far. The YES campaign’s association with this Government has been enough for many on the NO side to simply write off any prospect of change and to withdraw from constructive participation. The Manichean hysteria, or Machiavellian positioning, of the Twittering Classes has been startlingly. Worse still is the paranoia that masquerades as even-handed analysis: the generation of historical fiction to justify present prejudice, the apocalyptic yellow journalism that cries out about the ‘end of democracy’, or the comparison of the Government’s actions to ‘sham democracies in some corners of the developing world.’

In any event, debate over abolition of the Seanad is hotting up. The issue isn’t, of course, reform of that hoary chamber. That isn’t on the ballot. Indeed, there’s no reason to think that any of the belated, starry-eyed schemes of the NO camp could be agreed to amongst themselves, much less the voters at large. We, both politicians and the public, have already dithered for seventy-five years. And, for better or worse, there is no reform consensus now. Voting against abolition in the coming referendum would merely prolong our embarrassment without any real likelihood of change. The brave soldiers of Seanad reform, fighting as one against its loss, would soon become a circular firing-squad. And we should be grateful that it’s so, given the untried and increasingly convoluted ‘reform’ plans hatched almost daily by the Seanadistas. Drawing from vivid imaginations, many of these schemes maintain an undemocratic element that shouldn’t be acceptable in our republic. Others, in attempting to open up senatorial elections to more voters, merely duplicate the Dáil’s electorate and mandate. If anything, this is worse, threatening gridlock and conflict between the chambers that would effectively undermine democracy in practice. In sum, Seanad apologists shouldn’t deceive themselves or us with the false hope that a NO vote would bring positive reform, or indeed any change at all. To misquote Einstein, not doing anything over and over again and expecting a different result is the very definition of insanity.

And a YES vote is far more likely to bring parliamentary reform that matters. This won’t happen because the Dáil will absorb meaningful powers from the Seanad. There is, in fact, no power to grab. Instead, attempts to create new, significant functions for a reformed upper house occur at the expense of our democratic chamber. Nor will reform happen by the simple grace and generosity of the Government. But the abolition of the failed, undemocratic, and unnecessary Seanad will make both the Dáil, and the Executive, more immediately accountable to the voters. A YES vote will give us, both politicians and the public, a real incentive to put away the speculative parlour games of Seanad reform and turn to discussions of meaningful change. This Government, and future Governments of any other political persuasion, will find it harder to hide. They’ll have to show themselves to be serious and, if they fail, we, the people, can throw them out.

It must be admitted that the Government parties stumbled out of the gates in their campaign for a YES vote. It is especially unfortunate that it’s centred on arguments about savings, either in pounds or politicians. Such rhetoric has some populist traction—I’ve seen this in my own neighbourhood—but for much of the electorate this is a short-sighted strategy. Most of us would pay a bit more to a few more if we believed it might bring better governance. The YES strategy is particularly unwise, too, because the argument for abolition is very strong, straightforward and easy to grasp. The Seanad is fundamentally undemocratic and entirely unnecessary in a republic of our size. It is elitist and redundant. It may be possible to correct the former, but not the latter. If the abolitionists can focus on these facts, there’s little to fear from the apologists.

As is well-known, the present Seanad is an undemocratic club installed by a very small fraction of the nation on the basis of thinly-disguised partisanship (the vocational panels), explicit elitism (some, though not all, of the universities), and political cronyism (the Taoiseach’s nominees). Its members are often individuals rejected by the public in general elections and who seek to return to other, meaningful offices as soon as possible. Contrary to the NO campaign, this half-way house lacks any meaningful democratic mandate; their electorate is too small and too distant. Only an idiosyncratic use of ‘democracy’, or Orwellian doublespeak, could suggest otherwise. There’s far more democracy in this referendum, and of course our general elections, than in any Seanad election every held. The name of ‘Democracy Matters’, as one of the civil society groups engaged in the referendum debate unashamedly refers to itself, expresses their aspirations for the chamber rather than its actual authority. This is as little rooted in reality as the hope of reform from the reformers.

To be fair, ‘democracy’ has multiple meanings in contemporary discourse. But its central, common sense is stable, self-government that attempts to ensure that the will of the people is expressed in its institutions and laws. Modern states, not least our own, associate this with republicanism in its widest sense, where representatives legislate on behalf of the people subject to periodical general elections. Seanad apologists, however, use ‘democracy’ for a more attenuated mandate that is currently only around one per cent of the electorate. Their language is still more suspicious when, for all the talk of adding new or diverse voices through reform, many maintain inherently elitist voting privileges for third-level students (though a sop is admittedly thrown to the underprivileged in some schemes through their personal Senator). But this vulgar tinkering with democracy ignores the fact that our Dáil already represents all of us. Indeed, many of the reformers propose representation for narrow interest groups in what looks suspiciously like the misguided, failed vocationalism we now have. And it’s difficult not to feel that we’re being told, at least by some of the NO campaign, to leave our republic to the noblesse oblige of our betters. They ask, or expect, too little of us.

What’s more, the Seanad is superfluous for a state like ours. Existing second chambers are largely a holdover from the ancien régimes of pre-modern nation-states. In some federal systems like the United States or Belgium, they exist to represent distinct territorial units or cultural groups. But as a small republic that long ago rejected the more vulgar aspects of our aristocratic and imperial inheritance, such a justification doesn’t exist here and now. And one house of parliament works well throughout the world. In addition, the Seanad was never intended to be, nor ever has been, a check on the people’s representatives. Indeed, if it had been, it wouldn’t have been created or would’ve been abolished long ago. It is appropriately a lap dog, not a watch dog. Our courts and our general elections are far more meaningful checks. The Seanad has, it’s true, amended bills, but this was often at the Government’s bequest. Such amendments, as well as heightened scrunity and delay, can also easily and more appropriately be accomplished in our democratic chamber through a strengthened committee system. In short, the disappearance of the Seanad will not be felt. Rumours of its life have been grossly exaggerated.

As the Government outlined in some detail last week, Seanad abolition is part of a wider accountability agenda of legislative reform. If this has been too slow, much of it—eg, changes in the stages of law-making—is premised on abolition and makes little sense without it. Some minor elements are already underway. For example, the Coalition has already asked our legislators to sit more often to more carefully conduct their, or rather our, business. They also propose to give the people’s representatives a greater voice by making it easier for individual TDs, including those on the backbench, to introduce bills. In addition, membership of parliamentary committees will be chosen more equitably, in proportion to party representation. Committees would also review proposed bills prior to their introduction, giving members the possibility of shaping its principles rather than, as now, merely working within the limits of ends dictated by the majority or the Executive.

These are potentially significant reforms, each in line with a more inclusive and consensus-oriented parliamentary model found elsewhere in Europe. When implemented, they could be meaningful immediately. This doesn’t mean, however, that more isn’t required. The Government may, for example, need to reconsider their proposal to cut the number of TDs. We’ll have more work for them to do in a unicameral system where all voices are to count. In addition, the Ceann Comhairle could be elected by secret ballot. The use of the parliamentary guillotine limiting Dáil debate could be reformed. And, as in other nations, ministers could be drawn from beyond the legislature as the executive remains responsible to it. But the thorniest issue of balancing a mature party system with a more responsible Dáil cannot be easily legislated. If the use of a party whip can stimy debate, some such system is necessary in modern democracies to ensure party cohesion and policy accountability to the public. Some of the ideas already proposed might begin to loosen the grip of the executive. In any event, however, we can propose more and can, indeed should, hold the Government accountable for its performance.

Indeed, it’s important to see both the campaign to abolish the Seanad and the proposed Dáil reforms in light of the general elections that will follow the referendum in the years ahead. Abolition would only take effect at that time. And there’s no guarantee, of course, that the Government parties will find themselves still in power. In the aftermath of the referendum, especially if there’s a successful YES vote, my hope would be that we, the people, might focus our attention on our democratic chamber and our role, in a republic, to hold them to account. All partisans should ask themselves what reforms they’d like to have already implemented if they found themselves in opposition after that election. And if Government proposals are insufficient, if their actions are inappropriate, we should ensure that they find themselves in opposition then. Similarly, if the other parties cannot make constructive proposals, but continue to engage in mere factionalism and fantasy, we should ensure that they remain in opposition. This is as it should be. Democracy matters.

4 thoughts on “Democracy and Other Matters”