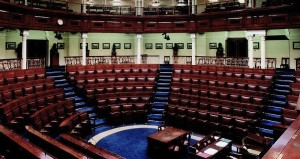 As noted a number of times over the past number of years on this forum, this government was elected on a promise of ‘radical reform’.  With the spotlight turned again on Dáil reform – because of the government’s promises of more change though only if the Irish people vote to abolish the Seanad – a review of their record in this area seems timely.

The Table below summarizes the 18 specific promises for ‘radical’ Dáil reform listed in the 2011 Programme for Government and indicates (so far as I know, and mostly based on the 2012 and 2013 government reviews of implementation) progress to date. (Note that this list does not include the proposal for Seanad abolition or the failed Abberylara referendum.) 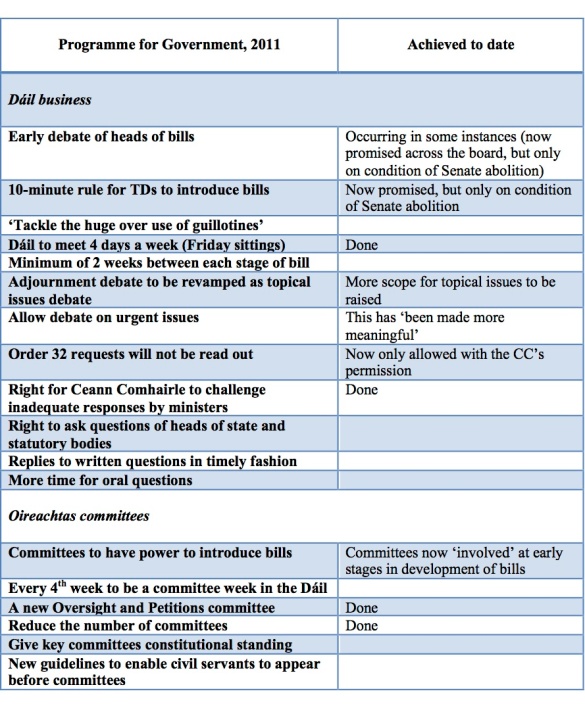 Quite apart from the question of whether these reforms are truly as ‘radical’ as the government likes to make out (most objective commentators think they’re not), the plain fact is that the implementation to date has been pretty abysmal.  In the two years since the publication of the Programme for Government, just 9 of the 18 reforms have been implemented (in whole or in part). (I will stand corrected if I’m wrong on the 9 that appear not to have been implemented.)

The facts would seem to speak for themselves: on the question of Dáil reform this most certainly has not been a radically reforming government!

The latest twist in the Dáil reform saga is the new list of reforms promised but only on condition of the Irish public voting in favour of Seanad abolition. The list includes two items already covered in the 2011 Programme (relating to heads of bills and the 10-minute rule). The other six reforms are as follows:

Clearly, these are designed to address the deficit in parliamentary scrutiny that many fear would occur with the abolition of the Seanad.  Potentially the most interesting is the proposal to share out committee chairs more fairly among all the parties. Perhaps the generally quite positive reaction to the work of the Constitutional Convention (at least to date) might explain the references to ‘deliberation’ and use of external experts.

This government needs to make a hell of a lot more effort if it is to truly demonstrate its ‘radical reforming’ credentials.  And certainly there should be pause for thought about letting it have its way on abolition of the Senate unless there are some serious, unambiguous, and locked-in proposals designed to truly improve the balance between parliament and government in this country.

2 thoughts on “Dáil reform? Some small steps, but not nearly enough”