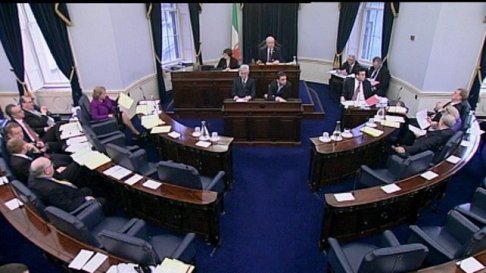 A new Seanad reform bill was introduced in the Seanad today by Senators Katherine Zappone and Fergal Quinn. It is available here. The main point of the bill are that it should move to a reformed house with new powers, but without requiring constitutional change. It proposed elections by universal suffrage, to close the democratic deficit, with non-geographic constituencies (on these see an interesting post by Michael Gallagher here). The other reforms are to allow the Seanad conduct public inquiries, to monitor secondary legislation (Statutory Instruments), especially that which results from EU directives, to approve government appointment’s to state boards and the judiciary. These are reasonable reforms that parliaments should engage in, but one wonders why give them to the Seanad, and not the Dáil? An argument might be that the Dáil should spend its time on primary legislation. But if it doesn’t, and it doesn’t really, this should probably be the first port-of-call for reformers. But we might see here is a real separation of powers, where the Seanad has powers over certain areas, and the Dáil over others. This differs from the current, unequal, division of power between the two chambers. This would mean Ireland would not face the sort of gridlock that we see in countries with symmetrical bicameralism, such as Italy.

This aside, what about the Bill on offer? There are a number of problems with it that one might object to. None of these are fatal, and could be fixed with amendments, although the solutions could be administratively messy.

First, and most crucially, is the unequal weighting of votes across constituencies. It suggests that voters should assign themselves to the constituencies (either university seats or the panels, Agriculture, Labour, Culture, Industry and Administration). The universities have six seats in the Bill and the other panels between 8 and 10 seats each. What happens if 1m people assign themselves to the labour panel, and just 50,000 to the arts? The voters in the arts panel would be over represented compared to the others. This would contravene a principle in the constitution that there should be broadly equal representation. The solution would be to allocate seats on the basis of the number of people who register to vote in a certain constituency. It’s possible, but it would be administratively expensive.

Second, there is a very strict gender requirement that half of the Seanad should be of either sex. This is to be achieved by sub-panels made up of men and women . It is proposed that there would be complete gender equality in each constituency (panel). This is rather rigid, and would be impossible to satisfy in the 9 seat constituencies they also propose.

Third, casual vacancies are to be filled by going to the next placed loser (of the right gender). This might seem odd to reward a person who failed to get elected because of the death or resignation of a person who beat them. This could disrupt the balance of the majority (although this is unlikely as the Taoiseach still retains 11 nominees – who are much more likely to be party hacks because s/he’ll have less control of the Seanad). It would be easier to allow substitutes as the European Parliament has.

Fourth, and rather radically, it suggests all passport holders should have a vote. Though we go on a bit about the diaspora we don’t tend to let them have any real say. But do we want to? Emigrants will have very different interests in the country than those who live here and pay tax and/ or use the state’s services. Might a constituency for the diaspora make more sense? But this would require constitutional change.

Fifth, There is a provision that every candidate should be approved by a ‘Judicial assessor’ – a former High Court judge (why do we think that these people are best placed to perform virtually every task that requires a measure of independence?) who will decide whether the candidate truly is an expert or has a genuine interest in the subject of the panel the candidate wishes to stand for. While I’m sure in reality this would not be problematic, it seems oddly anti-democratic and elitist to allow someone ‘approve’ who is eligible to stand as a candidate.

While there are good practical arguments for a bill that requires no constitutional change, it limits any real bicameral reform. So if we want a properly reformed second chamber why act within these limits. It will just give an imperfect outcome. Some of the problems are also as a result of it being based on the existing legislation. This may have made it easier to draft, but keeps imperfections that could easily be removed.

The arguments the anti-abolitionists are using about abolition are also flawed. Ireland will not descend into some Zimbabwe-like state with the absence of Seanad ‘checks’. Nordic countries manage with a single chamber, without this issue. The key is that in those countries the parliament is more independent of government than here.

I still find it hard to see why we should spend much time and effort on Seanad abolition or reform. There is an assumption by directly electing senators we’ll get a better calibre of senator. Oddly though, it is the appointed and university senators who have made most contribution to the Seanad, not the professional politicians. I suspect a cut in the salary of Senators to where we cover their basic expenses would lead to a more radical change in the composition of the Seanad than direct election, which could lead to making it more likely to be a mirror of the Dáil.