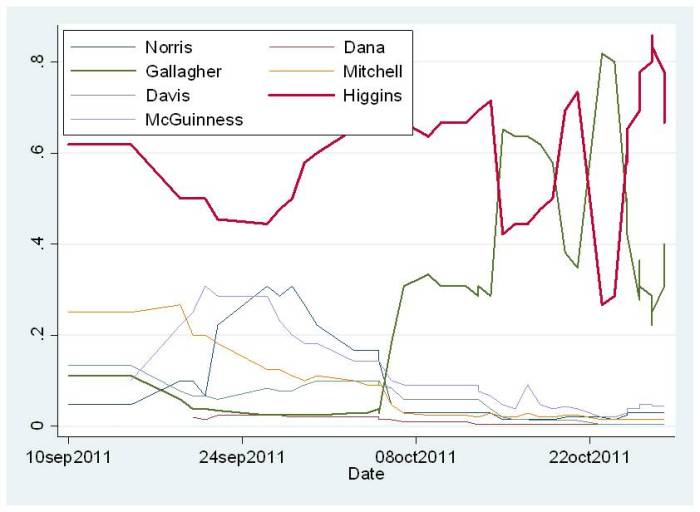 We might be interested in betting markets as a rival to polling for measuring shifts in support, particularly in Ireland where polling is comparatively infrequent and irregular. The idea is that people putting real money on a result may know something, and that those who do have information will see value in odds,  and the market will be efficient because bad offers will be exploited by those with information. I’ve tracked the Paddy Power election odds for over a month, and graphed what the market thinks the result will be, over time – it is a representation of the odds for ‘who will be the next Irish President?’.

In this graph the scale is the implied probability for the odds. I have taken the numeric of the odds, so evens is 1, 2/1 or ‘two to one’ is 2 and 1/2 or ‘two to one on’ is .5. To convert the fractional odds to probabilities, I inverted the numeric odds, i.e. divided 1 by the odds plus one.  So on the graph the higher the line the shorter the odds, that is, the more probable the market thinks the candidate will win the presidency. If the candidate is evens they’ll be at .5 on the scale.

As was noted in another post on this site, the betting market does not seem to offer another independent source of information but follows the polls. There has been a lot of volatility in the last number of days, unmoved by polls, which may be taken as the market’s read on what has happened in the last few days of the campaign. This might then make it a reasonable test of the ability of the betting market to perform such a function. However I doubt that the volatility seen in the market means there was a similar volatility in the vote intentions of the electorate.

For much of the short campaign Michael D. Higgins was the clear favourite. Mitchell, McGuinness and then Norris stood out at times, but never came close. It was just when the polls revealed that Gallagher had at about 20% in RedC and IpsosMRBI polls at the start of October we saw the odds move for Gallagher (in fact they moved a bit before the results were published). They then shifted dramatically the following week revealed he built on that lead. Some money moved away from him as attacks on Gallagher increased, but they didn’t have any impact on the poll results published last weekend (though the campaign against Gallagher would have only been in its early stages when the fieldwork was done for last weekend’s polls. Those results pushed Gallagher’s standing in the betting market back up, but it has been moving away from him in the last two days, probably as a result of the Frontline debate.

5 thoughts on “Betting odds for the Presidential election 2011”