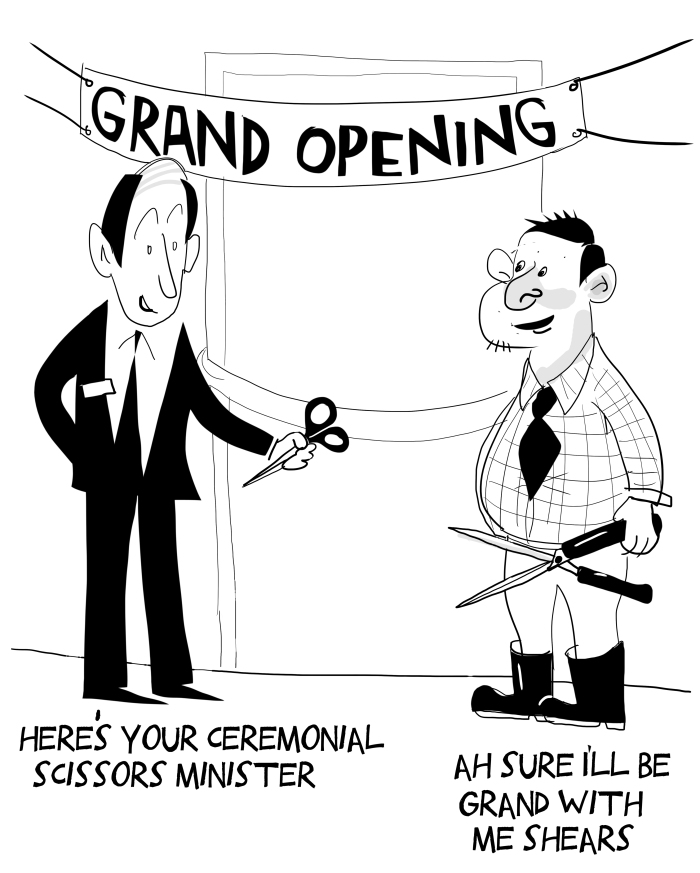 Yesterday some of us wrote in the Irish Times about what might need to be done in the government’s first week to show it is serious about political reform. One of the suggestions was for using the Seanad route  to appoint a minister with relevant experience to what will be the strategically important  post of Minister for Foreign Affairs. The whole government formation process will be critical to showing how serious this government is about changing politics and political reform. Who gets what departments and what departments are chosen will determine the focus of the new government,  perhaps even more so that the programme for government.

If a minister with drive and imagination takes over in Education, we might see some changes in that notoriously conservative department. One problem in the Irish administrative system is that ministers must drive pretty much everything. Civil servants cannot make decisions and most are disinclined to push issues (there are exceptions. The smoking ban was one where it was a civil servant who effectively made the running, with a supportive minister). Because ministers must make the running on issues, and because there are comparatively small numbers of them, and many of them are focussed on little more than re-election (as we  can see from Jane Suiter’s research on the distribution of goods by ministers of sport and education), departments are only able to do so much at any one time. Any minister can really only manage three or four major policy changes at one time. This severly limits the ability of Irish governments to act decisively in a wide range of areas simultaneously.

Because of this limitation (which might be alleviated if we had more and non-parliamentarian junior ministers who had delegated functions, interest in policy and ability) the allocation of and focus of cabinet portfolios is crucial.

Constitutionally we need to have a Minister for Defence, but there is no good reason why we would waste the talents of a senior minister on a department that can effectively run itself. Therefore it should be merged with a cognate senior department, perhaps Justice? Similarly we need and will always have a Minister for Agriculture. But agricultural policy is determined elsewhere and the department is essentially one that administers EU schemes, rather than gives top level policy advice. It doesn’t need a senior minister to devote all his or her time to it. If Agricultural policy is a focus it is in the Agri-foods side and perhaps could be merged with Enterprise and Employment.

So Enda Kenny must think about what Ireland’s strategic needs are when he chooses his cabinet. As well as the personnel, the nature of the posts they fill will be as important. Ireland needs another senior economic ministry, and if he is at all serious about public sector and political reform, there must be a department for this occupied by a senior and capable politician.If he is conservative in reallocating functions we have little hope of extricating ourselves from the current situation. If he takes party considerations into account, and gives people jobs on the basis of gender, geography or electoral success, we will know it’s unlikely that the new government is serious.

Another advantage of the radical reallocation of functions between departments is that it would break up some of the existing hierarchies and relationships that have developed. Reallocating functions alone will not bring about a change in the civil service culture, but it would enable a new one take hold if this were pushed.

In yesterday’s Irish Times we argued that it would be useful to have someone in Europe with stature, experience and contacts to take on Foreign Affairs. This probably means that it should be someone from outside the new Dáil – John Bruton or Pat Cox spring to mind. There are some problems with using the Seanad to appoint cabinet ministers, which one of the reasons it has been so seldom used. One is that the new Seanad takes some months to be convoked, so when it happened in 1981, Jim Dooge, was not formally appointed for a number of months after the new government was elected. There is a way around this if one can persuade a current Taoiseach’s nominee to resign and then the new minister could be appointed to replace him or her.

This could be a radical and reforming government, and we’ll know very early on if it wants to be.

3 thoughts on “Who’ll get the Department of Defence?”