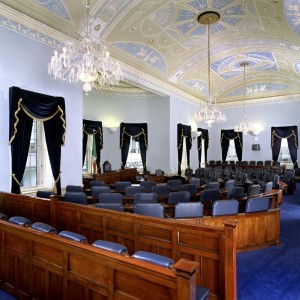 Fionnán Sheehan reports in today’s Irish Independent that the government is considering putting a question by referendum on election day to abolish the Seanad. This might be seen as a genuine attempt at reform,  a desperate attempt to divert attention from the obvious – the economy -, or a way to deliver some electoral goodies for Green voters. In any case it would hardly seem worth it. First, I suspect nothing will reset the agenda of the election away from anything other than the economy. Second , if it is an attempt at reforming a broken political system, it’ll do little to fix it. And Green voters might not be impressed by this, coming as it does, on the eve of an election – it might smack of desperation.

Why won’t abolishing the Seanad achieve much? The Seanad is arguably a waste of time and money, but it’s hardly the problem. Getting rid of it will save a many millions, and it probably won’t make anything worse, but it will do little more than that. It would be a tokenistic gesture that would not improve the country’s political system in any real way. It might make the proper functioning of a committee system even more difficult. This type of populist measure would surely get the approval of the people but a bit like Fine Gael’s proposal to reduce the number of TDs, would achieve nothing or might even have deleterious effects if not coming as part of more radical measures.

The real problems in Irish politics are the ineptitude of the civil/ public service and the dominance of the executive. So generalist ministers are advised by generalist (read amateur) civil servants, and the Dáil has neither the incentive nor the opportunity to question the government. In short, stuff gets though that should never be allowed. A cheaper and more effective exercise might be to change the standing orders of the Dáil. These changes could include the election of the Ceann Comhairle by secret ballot. One might also consider using the Borda Count to elect committee chairs.

Another issue for Fianna Fáil would be that it will severely limit the ability of the party to rebuild itself after the election. If as I have argued here Fianna Fáil might be dominated by older TDs, it will need the Seanad to get 10 or so younger people into Leinster House that could form the nucleus of a rebuilding exercise. For this reason alone I suspect nothing will come of this.

26 thoughts on “Government considering referendum to abolish the Seanad”