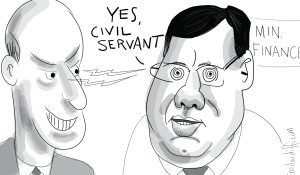 The decision to review the advice and structures of the Department of Finance is to be welcomed (see Eddie Molloy and Dan O’Brien on this here and here). It is pretty obvious that the department lacks the capacity to give good advice to ministers, and that it was careful never to give information out that might damage its own reputation or that of its minister. It was self delusional in its self-evaluation, and imposed this type of self-delusion review throughout the public sector – think how PMDS and Quality Reviews work in universities.

The rationale for the review is clearly that the best advice wasn’t good enough and the decisions ministers made were sub-optimal because of the absence of good advice. This raises issues about the role of the minister in decision making.  While we should not expect that political leaders have expertise in every area that they make decisions on, they should at least bring some ideas to the table. They cannot be blank slates on the operation of the economy if they aspire to be minister for finance. The concept of a pro-cyclical fiscal policy is hardly rocket science! The minister’s political philosophy should inform him or her about whether this is a good or bad thing.

The idea that a minister should be a slave to departmental advice is anathema, I suspect, to most, including ministers. So ministers then cannot absolve themselves of responsibility by pointing to poor advice. Minister have a responsibility to get as wide a spectrum of advice as practicable. If the civil service is offering them advice that is very clear-cut it should be the duty of the minister to seek out counter arguments. A recent book on Abraham Lincoln’s style of decision making shows that he excelled by surrounding himself with a ‘team of rivals‘. Lemass also had the self confidence to give ministers a free rein and encourage them to come up with bold ideas.

The hierarchical culture (that word again!) in the civil service and the complete deference given to ministers is a problem. Even if there are good specialists in a department,  they need to work in an environment where they can speak freely to their seniors including ministers. While different Secretaries General have differing styles, at the moment it seems ministers rarely interact with civil servants (we don’t really know, and can only rely on what ministers and civil servants say) without the SG being present.  This probably hinders a free flow of information.  If it’s better decision making we’re after, we might want ministers to be more curious and civil servants to be more willing to be robust in their dealing with ministers.