Building on from my study on the ages of TDs historically, I have conducted a more in depth analysis of the ages of TDs elected to the 31st Dáil. Overall the average age of the new Dáil on its first sitting was 48.5, in comparison to 50.4 for the 30th Dáil in 2007.This is the first time since 1982 that the average age has dropped, however the change is only marginal. 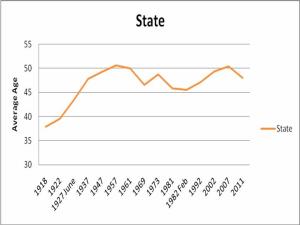 The makeup within the new Dáil leaves the average age of the government at 48.0, whilst the average of the opposition is 49.2. Of course the big talking point in the media in recent weeks is the average of the newly formed cabinet which is 56.5, with only two ministers under the age of 50, namely 48 year old Simon Coveney and 32 year old Leo Varadkar.

The aging cabinet suggests that not much has changed in the recent election, and there has been no significant influx of new, younger TDs taking a seat in the chamber for the first time. A more in depth analysis of the this year’s election, and a comparison with the 2007 election gives us a better understanding of whether there have been any change in the ages of our politicians. Table 1 compares both elections, and is broken down by party and region:

First and foremost the table gives us a clearer indication of the undercurrents of the average age of the new Dail. In terms of the parties, Fine Gael has the youngest average age at 46.9. Independent and ULA TDs are the oldest at 51.4. Geographically Dublin is home to oldest TDs on average. The mean age of 52.1 is much higher than any other region, and 3.6 years higher than the national average. Comparing it with 2007 the party breakdown shows a 5.6 year drop in the average age for Labour from 2007 average age of 55. Otherwise there has been no significant drop in the average of the other 3 parties. As pointed out TDs in Dublin have the highest average age, which is interesting in contrast to 2007 when they were the joint youngest. There has been a significant drop in the mean ages of Connaught-Ulster, which TDs 5 years younger on average than 2007. Another interesting aspect is the break down between urban and rural TDs. In 2007 TDs in urban areas were slightly younger than rural based TDs, however those elected in the last election are 1.7 years older on average than their “counthry’’ counterparts.

The retirements of many sitting TDs in Connaught-Ulster may explain the reason for the drop in average age of both the region and the age of rural TDs also. The drop in Labour’s average age may be down a new generation of Labour supporters who decided to get run in the face of the current crisis. Fianna Fail’s average age of 48.3 indicates that whilst the party’s average age has dropped this is largely down to the huge number of retirements of sitting TDs, and those who were elected in 2011 were the experienced politicians rather than new, younger candidates.

The comparisons indicate that there has been no severe overthrow of the status quo, our TDs are still by in large middle-aged. Is this because younger people did not run for election or were there a plethora of younger candidates but the public did not vote for them? Drawing on Dr. Adrian Kavanagh’s analysis of the ages of candidates we can compare the percentage of TDs between the ages of 21-35 who ran in the election, with the percentage of those who were successfully elected. 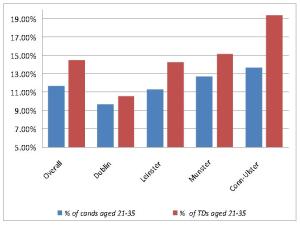 Figure 3: Percentage of candidates and TDs aged 21-35 by party

Whilst these charts are only comparisons, they raise interesting questions. Was the age of a candidate a factor in whether they received votes? Was it a factor in whether they were chosen to run for their respective parties, or was it just that the older candidate was a better person for the job? Indeed was in simply a case that very few younger people ran for the candidacy at conventions around the country? Whatever the answers it is clear that despite the current crisis there has been no great youth revolution in Irish politics. Some may argue that this fact is trivial but it deserves greater attention. If we take the argument for instance about the need for more female TDs in the Dáil it is the general consensus that there must be a greater gender balance. Should this not be the same for the age demographic in Dáil? There are interesting arguments on the issue. A greater number of young TDs may create a greater balance and perhaps give the young people they represent a greater voice in Irish politics. On the other hand perhaps an older politician is more qualified for the job, and can represent their young constituents just as well as a young TD. Either way with the bulk of our population under the age of 35, this issue should be taken into account during discussions around political reform.

The data used in the historical analysis (Figure 1) was mainly drawn from the excellent electionsireland.org website. The average ages of each Dáil are a closest possible estimate, as the ages of some TDs were not available, particularly in earlier elections. Due to time constraints only a select number of Dáils have been analysed. However I hope to complete an analysis of each Dáil since 1918 in due course.

Mark Farrelly (MARK.FARRELLY@nuim.ie) is a student on the Masters in Society and Space programme in NUI Maynooth and he is currently carrying out research on youth electoral participation and representation levels in the Republic of Ireland.