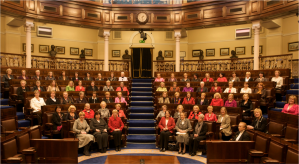 22% of TDs in the 32nd Dáil are women – a result largely attributed to the introduction of gender quotas in the 2016 general election. This is a record for Irish politics and the result speaks to the debate surrounding the continued underrepresentation of women in political life. Both in Ireland and elsewhere, the ratios of men to women in democratic institutions are, typically, unreflective of the society they claim to represent. In recent years, this has led to calls for specific reforms to be implemented in order to redress the balance.

It is argued that, for equality of voice, women should represent women. This is descriptive representation – when political actors are a ‘mirror image’ of those they represent in terms of gender, age, race etc. However, such actions beg us to ask the question of why this matters. If we vote for candidates that promise to run the country in a way that aligns with our own policy preferences, then why should it matter whether or not they share our gender?

In the politics of presence, Anne Phillips (1995) argues that women should represent women because they have a common group identity by virtue of shared life experience on a variety of concerns, including child-care, abortion, equality and welfare. As such, female politicians are best placed to campaign for female-friendly policy issues by virtue of their group membership. This is not to say that women are homogenous in their preferences – a religious woman may have a very different opinion of the current abortion rights campaign to repeal the 8th amendment compared to a non-religious one. However, Phillips claims that it is sufficient to establish differences in policy choices between men and women on certain issues, without requiring the universality of opinion among women as a group, in order to say that descriptive representation matters.

Further, scholars such as Jane Mansbridge argue that increasing female participation in government has important deliberative effects since legislators and voters of both sexes can learn about each others’ preferences and update their own attitudes following open discussions.

From this we can see that if descriptive representation is to matter, it needs to satisfy several criteria First, men and women must differ in their political attitudes, at least on some issues. Second, these differences must be reflected by male and female politicians in office. Third, female representatives must hold political attitudes that are closer to the women in their constituencies than the men and they must be willing to act according to these positions.

Evidence from my own study of 27 EU countries, shows that systematic differences between men and women do exist on attitudes towards same-sex marriage, abortion, women in the workplace and the welfare state. However, the significance of these differences varies widely across countries. For example, Irish women show systematically more liberal preferences on same-sex marriage and abortion compared to Irish men, even taking into consideration differences in religious affiliation, class, age and party preference. In Poland, however, men and women did not differ significantly in their attitudes towards these issues.

The second and third criteria are harder to measure. Studies of representatives policy positions are normally assessed at the level of the party, not the candidate. Further, in European parliaments at least, the party whip means that even if female candidates hold distinctive attitudes towards policy, they can be prevented from acting on them, or even expressing them publicly, if they conflict with party policy. Also, in opinion polls, people are usually asked which party (and not which candidate) they voted for in elections, preventing researchers from examining the proximity of a candidate’s policy attitudes to the men and women who voted for them. Nevertheless, evidence from 15 countries in the European Election Candidate study from 2009 shows similar differences in attitudes towards same-sex marriage and abortion between men and women politicians as with male and female voters. However, these patterns do not hold for welfare state issues and attitudes towards women in the workplace.

And what of the claim that more heterogenous institutions can improve the quality of decision making? While much more work needs to be done in this area, data from the 2009 European Parliament elections shows that both male and female candidates’ attitudes were closer (and more liberal) to each other in countries that returned a greater number of female MEPs on the issue of women in the workplace (see Figure below). Specifically, when male and female politicians were asked if they believed women should cut down on paid work for the sake of the family, men’s attitudes were significantly more liberal in countries that had more female MEPs. From this it seems that male politicians who have more opportunities to interact with female colleagues are likely to move their attitudes on policies that directly affect women, closer those of female MEPs.

All of this suggests that descriptive representation does matter because men and women’s policy attitudes differ, at least in some respects, and because politicians can learn to update their policy attitudes when they are exposed to more heterogenous political environments, which overall, makes for better informed decision-making.